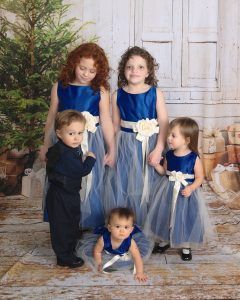 Paula and Daniel are the foster parents of five kids; Ella, Lila, John, Madison and Cecilla. Knowing of their children’s various disabilities, they enrolled them in The Arc of the South Shore’s First Early Intervention Program. This program helps children with disabilities develop and progress in hopes that they will be able to adjust in public schools.

Cecilla, being the youngest at one years old, doesn’t require as much service as her older siblings. However, she was exposed to substances while her mother was pregnant with her. The story is the same for John and Madison as well, but for them, their parents continued to use substances for the first six months of their lives. John, who is the second youngest, will be turning three years old, and receives services two times a week. Madison, recently had had her last EI session. All three children had a very difficult start to life, which led them to be behind in everything. “The Early Intervention program has been a huge help for them and has been able to do some outstanding work,” their adopted mother Paula said.

The real success story is their oldest daughter Ella. Ella is six years old and attended the EI program four times a week, after she was diagnosed with autism. Ella is now enrolled in kindergarten and still continues to have one-on-one help at school. Paula and Daniel adopted Ella when she was nine months old. At an early age, her pediatrician didn’t think there were many possibilities to help her. The Arc, however, did everything they could to teach her and help her grow as a learner. “The Arc took her from, ‘how will anything be possible; to wow,'” Paula says. Shocked by her progress, the pediatrician was amazed by how much Ella has grown and thrived. The Arc team, as well, was stunned by the progress Ella has made and how far she has come. “It wouldn’t have been possible without the Early Intervention team,” she said.

Paula and Daniel believe that the Arc’s Early Intervention Program has a great staff who are excellent at coordinating all aspects of the program. The development they make with these children is outstanding. They have a solid and stable team and are very consistent and extremely helpful. Even after the children have aged out of the program, they help coordinate with the special-ed programs at the schools the children will attend. Overall their experience has been wonderful, and they are excited to see how it continues to help with their youngest children.