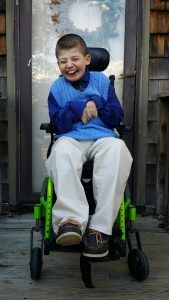 Dylan is a charming, delightful, and funny young man who just started a new chapter in his life, high school. When Dylan was five months old he suffered from shaken baby syndrome. Now that he is a young man he needs full care; he is visually impaired, has cerebral palsy, requires a wheelchair, has academic special needs and has hand splints. But despite everything going against him he continues to be a funny and loving high school kid.

Dylan was eight years old when his now-foster mom took him in. Rose can only be described as amazing. Over the years she has taken in hundreds of foster kids, many of those with disabilities. “It is just second-nature to me,” Rose said. “With Dylan it was no question, watching him grow and his willingness to learn has been incredible.”

Dylan started his first year of high school, after the middle school program was no longer age appropriate. Dylan has thrived in the new environment, loving interactions with every student. “The school has a great program,” Rose said. “But Dylan’s willingness to learn and try anything he can makes it easy!” Dylan has a Personal Care Attendant (PCA) at home who also goes to school with him every day. She assists with everything from arts, his favorite, to learning all the new technology. “Dylan has a laptop, cell phone and Ipad,” Rose said. “But his favorite is the Ipad. He loves all music, but especially country music.”
While Dylan loves his new place at the high school, he also loves being home and interacting with all the family. Taking in so many foster kids and having kids of her own, Rose has a very big family. “He loves when everyone is home,” Rose said. “He is such an interactive and social kid that the more people the better.” But when Dylan first got to Rose there was one thing she had to do right away, and that was to get him to a feeding specialist to help enhance his diet choices. “He suffered from asthma and fatigue, so my first thought was to double his food intake.” It took time, but after trial and error with different foods Dylan’s asthma subsided and his fatigue was gone. “He grew like crazy!” Rose said. “It was such a change, he finally had stamina and was loving the energy he now had.” Now, Dylan loves food, the crunchier the better.

“Food is hard for Dylan,” Rose said. “But it has become one of his favorite things. One of our first trips to the movies, one of my other kids wanted him to try popcorn. That is when his love for crunchy, salty foods began.” Rose explains that since it is hard for Dylan to consume different foods, he will always make a face as though he is not enjoying it. “The lunch staff at school is always worried he isn’t enjoying it,” Rose said. “I had to tell him to not look at his face because he loves to eat and truly is enjoying it.” But Dylan has a great attitude and sense of humor, that he is willing to try anything.
But high school and food aren’t the only things Dylan loves he also loves adventure. This past year Rose rented a 12-person van to bring some of her kids down to Disney. “Dylan loved the ride as much if not more than the park itself,” Rose said with a laugh. “He looked out the window, taking everything in with a big smile on his face the entire ride.”

While Rose is a strong, independent mother who has care taking down to a science, she turns to The Arc of The South Shore for guidance. “The Arc has always been so wonderful,” Rose said. “They provide an annual report to discuss his care and are always on top of his development and changes.” As Dylan continues to grow, his wheelchair and other supplies need to be replaced, and The Arc is always supportive. When Dylan started high school, the morning routine was changed. Dylan gets picked up at 6:10 a.m. every morning, so Rose gets up with him at 4:30 a.m. due to his care taking a lot of time. “When Dylan stated high school I called The Arc,” Rose said. “I needed help figuring out how much time I would need in the morning, especially with feeding which is always the slowest.”